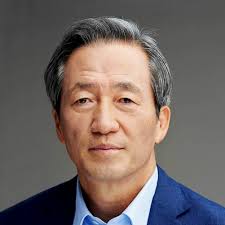 Date of Birth: 17th October 1951 in Pusan, Republic of Korea

Diplomacy has failed, persuasion has failed. Carrots and sweeteners have all failed. – (2013 Interview with The New York Times)

If you encounter economics with political calculations, the economy will be twisted. – (2012 – New Daily Report)

It has not been so long that Chung Mong-Joon had directly managed Hyundai Heavy Industry. He entered HHI in 1978, became the CEO in 1982, and was promoted the president in 1987. However, he started to engage in the political world in 1988 until 2016, thereby HHI has been managed by a specialist, and Chung Mong-Joon has shown minimal intervention of managing HHI during his political career. According to his published autobiography, Chung Mong-Joon claims that he entered politics because he wanted to fulfill one of his father’s unaccomplished dreams of becoming the president of South Korea. While Chung Mong-Joon is currently positioned as the controlling stockholder of the Hyundai Heavy Industry, which contributes to South Korea’s shipbuilding industry, he is also the honorary chairman of the Asan Foundation that supports social welfare systems. He has been elected as the Member of the National Assembly for 7 consecutive terms since 1988 until 14, May 2014. He also ran for presidency campaign twice in 2002 and 2012 but failed to compete with rival candidates. Furthermore, he was the former vice-president of FIFA for 17 years. Although not a lot of precise information has been provided to prove how active Chung Mong-Joon is in campaign financing, it is noticeable to look at the amount of opportunities he had in political positions in South Korea because his property is drastically compared to those of other candidates. For example, South Korea’s National Election Commission has made public that Chung Mong-Joon had spent around $300,000 for the 6th Nationwide Local Elections on June 2014. (Newsis – South Korea : 6th Nationwide Local Election campaign funding) However, despite the duration of funding of almost a decade, he had no other significant performances in South Korean politics other than being elected as the member of the National Assembly for 7 consecutive terms. During the 16th Presidential Elections of South Korea in 2002, Chung Mong-Joon made public endorsements with candidate Roh Mu-Hyun, but after his disappointment from the candidate’s behavior towards him during the electioneering, he resigned from the unified treaty.

Chung Mong-Joon needs to be viewed in two different timelines of the past and the future in terms of advocacy because not only has he been through business aspects of South Korea, but also showed eager political engagement. During 28 years of his political engagement, Chung Mong-Joon has been through diverse advocacy for or against public policies, but has not shown great success over the process other than being elected as a member of the National Assembly and contributing to make South Korea as one of the host countries for the 2002 Korea Japan World Cup. For instance, on his last 2014 nationwide local elections of Seoul city, his pledges focused on the development and safety of the Seoul citizens standards of living. His pledges included building welfare cities, job creation, inducement of private investment, reducing air pollution, and building a safety headquarter building. (National Election Commission – Pledges of each candidates [Language: Korean]) Some of his pledges imply that he wanted to introduce Hyundai’s infrastructures of building these facilities, for example, he wanted to implement air cleaners made by Hyundai in the metro in order for ventilation. (KBS News – Air cleaners inside the metro) As of 2018, reaching an age of 67, Chung Mong-Joon left the political world after the impeachment and imprisonment of Park Geun-Hye (18th President of ROK), Lee Myung-Bak (17th President of ROK), and the suicidal death of Roh Moo-Hyun (16th President of ROK). However, it seems to be that the main purpose he left the political world is to change many policies inside Hyundai, so that he can succeed his business to his son, Chung Ki-Sun, and change the 30 years of the specialist management system to an owned management system. During the process, Chung Mong-Joon has already acquired newly issued shares and increased his stake of Hyundai to 25.8% from 10.15% recently. (The Korea Herald – Increasing Shares)

Chung Mong-Joon is not known of either owning or controlling any influential media outlets. During the 2002 presidential campaign, he was supported by many Korean citizens because he promoted South Korea to be one of the host countries of the 2002 FIFA World Cup. Furthermore, during his political careers, he had no specific issues that troubled him. On the other hand, in 2014, he had to formally apologize to the entire Korean citizens because his son had claimed that the “people’s sentiment was uncivilized,” in which the people referred to the families of the sunk Sewol ferry victims, and uncivilized pointing out to their complaints against the governments disordered business handling ability. (The Kyunghyang Shinmun – Families of the Sewol Victim Sue Chung Mong-Joon’s Son for Uncivilised Post) In addition, as an apology, he has sent volunteers and much-needed gear from the HHI to save the ferry that sunk with almost 300 civilians in the West coast of South Korea. Throughout his political career, his public profile was highly influential because he is one of the chaebols, which is a massive industrial conglomerate managed by an owner or family in South Korea often exceeding legal authority.

Chung Mong-Joon’s main goal is to primarily support humanitarian aid, educational, and arts and cultural causes. As the chairman of the Asan Foundation, and inspired by his father, Chung Mong-Joon further created the Asan-Nanum (Sharing) Foundation, a public welfare foundation, in order to encourage young entrepreneurs through various educational and cooperative programs. On the other hand, the Asan Foundation provides modern medicine to rural people in pain, social welfare for citizens, and scholarships to youth who have been denied access to education for financial reasons. His lifetime giving exceeds $180 million. (Wealth-X – Chung Mong-Joon) In 2010, he also donated $500,000 for earthquake relief efforts in Haiti, and also $400,000 to the Pakistan Football Federation to rebuild football infrastructure which was destroyed by the floods in the country. As mentioned above, Chung Mong-Joon has recently begun to involve in managing the shares of the Hyundai Heavy Industry again in order to succeed the company to his son.

Officially retired from the political career, Chung Mong-Joon did not have significant controversies. However, another reason why he returned as a businessman is that there were a lot of complaints from Hyundai’s labor union questioning whether he really cared about his business since he has been focusing only in the political career. Furthermore, he also resigned from 2 presidential campaigns due to personal emotions. He was also banned from FIFA for 5 years in 2015 because he was going against Sepp Blatter about his long-term position as the president of FIFA, and his unethical plan of promoting South Korea as the hosting country for the 2022 FIFA World Cup, which came out to be unknown.

Raphael Warnock raised more money in the third quarter than any other congressional candidate from Georgia. [...]

Joe Manchin’s net worth is being scrutinized because of his opposition to climate change provisions in the reconciliation package. [...]

The candidates Donald Trump endorsed to challenge Liz Cheney and Lisa Murkowski haven’t kept up with the incumbents’ respective fundraising. [...]

John Fetterman far outpaced other candidates running in the 2022 Pennsylvania Senate race in the third quarter. [...]

Global supply chain disruptions are not only impacting consumers, but also America’s hospitals. Dozens of life-saving drugs are in short supply — forcing doctors to use less-effective medications. Mark Strassmann has the story. [...]

This month, the Treasury Department distributed more than $15 billion in payments to families of 61 million children. [...]

The Consumer Financial Protection Bureau is asking Apple, Facebook, PayPal and others about their fintech systems. [...]

One reason for worker shortage: Many started new businesses
21 October 2021

Through September, a record 1.4 million applications have been filed to start new businesses likely to hire workers. [...]

After weeks of fluctuations driven in part by Washington gridlock, share prices hit another high and put a dismal September in the rearview mirror. [...]

The agency said Arizona, South Carolina and Utah had failed to adopt rules protecting workers from the coronavirus. [...]

Despite school reopenings and the end of some federal aid, many people are in no rush to land a job. Savings and health concerns are playing a role. [...]

A more traditional view is competing against a newer approach that has become mainstream among economists. [...]